You might have heard the poem Lamia by John Keats, which includes the lines: “Philosophy will clip an Angel’s wings, Conquer all mysteries by rule and line, Empty the haunted air, and gnomed mine. Unweave a rainbow…”.

Richard Dawkins takes this to task in a book, Unweaving the Rainbow. In the introduction, he argues Newton’s optics, far from destroying the beauty of Keats’ rainbow, opened up a whole new set of wonders. They revealed mysterious beauties rather than destroying them. Dawkins isn’t the only person to express this sort of aesthetic appeal of science. We could equally mention Carl Sagan, Brian Cox, or a host of other people writing about science, right back to the 17th century.

It’s also an approach used by the Horrible Science books I wrote my PhD thesis on, and I can be quite cynical about it at times. Still, if I’m honest, it’s an aesthetic I often share, and I was reminded of Dawkins’ response to Keats at the Wellcome Images Awards last night.

A picture of a mouse’ kidney was put up, and the guy behind me whispered “wow that’s quite cool” and I found myself replying “that’s VERY cool”. It wasn’t the only image to make us go wow. This was my favourite: A scanning electron micrograph of clotting blood caught between the fibres of a plaster. 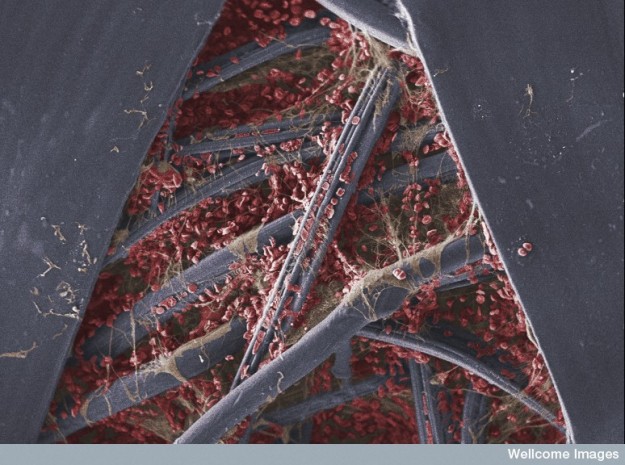 Maybe it’s because I fell flat on my face outside the British Library last week (leaving me with grazed-knee a 7 year old would be proud of…) but I was captivated by this image. It’s something really mundane, indeed something we might flinch at the ugliness of. In many respects the very opposite of Keat’s rainbow. However, here, it is shown in a way we would not normally be able to see. Science has ‘unwoven’ it, maybe, but in doing so has changed and abstracted it into something very beautiful. It’s woven something new.

Moreover, this image is not only wonderous in itself, but makes you wonder. Or at least it made me wonder. It drew me in, made me remember what I knew about blood clotting and question what I don’t already know. Because if we take Dawkins’ point seriously, it’s not just beautiful as a piece of abstract art, it is because I know something about the context of the image too. It is beautiful because it opens up new ideas, and stands as a reflection of years of history of people working to open such ideas up.

I’ve been planning to do a post on the philosophical and historical points around this – a sort of ‘brief history of awesome’ – but explaining the technological sublime in a couple of hundred words has, so far, proved tricky. I do promise to get around it at some point though. EDIT: done! A brief history of awesome, or a short treatise on the politics of wonder, featuring Immanuel Kant and Zaphod Beeblebrox.

5 thoughts on “The beauty of a grazed knee”