Part of the Japanese My Body series, this children’s book about breasts comes from the people who brought the world Everybody Poops, The Gas we Pass, The Holes in Your Nose, All About Scabs and, my personal favourite, Contemplating Your Bellybutton. It focuses on the relationship breasts play between mother and child, and includes several pictures of breastfeeding. It’s presented through cartoons, but there is something deliberately realistic about it, they do not want to hide behind metaphor or euphemism (see previous posts on mechanical metaphors in kids’ body books and ‘poo’ books). There are explanatory diagrams (cross sections, etc) as well as scenes of people laughing at their-own and others’ bodies. As with all the books in the series, the message seems to be that it’s ok to giggle and be interested in our bodies: our bodies are pretty interesting afterall, and pretty funny. 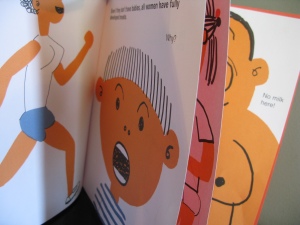 I thought about this book when, in Chicago last week, I spotted an ambulance with “medics for melons” scrawled along one side, on it’s way to a breast cancer fundraising walk. There was also a car with two large pink cushions strapped to the back, which after some thought I realised were meant to be a giant pair of breasts. I could see the appeal; a jokey way of declaring breasts as something worth talking about, and a couple of big cushions to sit on at the end of the walk. I wanted to take a photo, but it felt like a bit of an intrusion. These cushion car breasts were oddly life-like. Moreover, people were standing next to it, and I was conscious that these events, for all their humour and desire to raise awareness, are often a time where people remember friends and family who have died. They are pilgrimages of grief. It felt rude to get my camera out, so here’s a drawing instead: 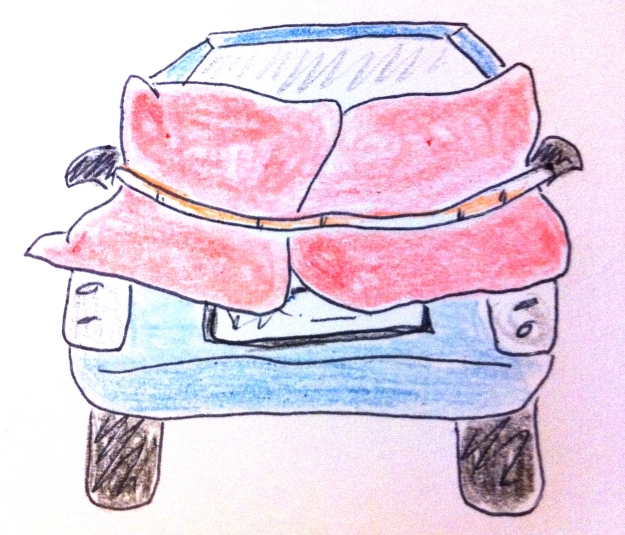 A car and its cushion-breasts.

Moving in the opposite direction to the people on this walk, I was struck by the diverse set of cultural imageries of breasts they were working within: in some cases applying, in some cases trying to transform. A bit later, in another part of town, I also walked by an event called ‘sausagefest’ which seemed to be, amongst other things (i.e. selling sausages) raising money for prostate cancer. (The semiotic play with body parts utalised by cancer campaigns is maybe a whole other issue itself though).

Like any bit of out bodies, breasts are not just bits of our bodies. They have a multitude of symbolic, personal, social, political and scientific meanings; meanings which often cross, even clash. I’m tempted to say this is true of breasts more than others parts of our bodies, but we could say similar of hands, legs, eyes or the penis. Or even of parts of us we see less often (e.g. hearts, guts, lungs, the brain), including those we need scientific understanding and/ or equipment to see (e.g. blood cells, chromosomes, neurones, enzymes).

There’s the subjective experience of having breasts yourself, there are medical ideas of them and artistic representations which may well be more objective, or at least accumulate further subjectivities. Breasts are also objects their owners share with others. I remember a friend talking about the way he had to “reclaim” his girlfriend’s breasts after they’d had their first child. He quickly received a clip round the ear from her, I should add. Again, this isn’t unusual in terms of bodily parts. We might offer a hand for shaking, holding, a high-five or a fist-bump. We  might offer to “lend” a hand too, metaphorically or otherwise. We share blood, or at least we may choose to donate it to shared social blood banks (as long as our blood is declared safe), we share lips to kiss, shoulders to cry on, an arm to lean on, etc, etc.

Breasts come in a range of shapes and sizes, and change over time. Their semiotics are similarly shiftable. Just as breasts may be used to symbolise something else entirely, they may themselves be understood or reconsidered via analogies with other forms or cultural objects. A friend, listening to coos over how much her baby daughter had grown, patted her chest with both hands and smugly beamed “goldtop” (translation: very creamy brand of milk). Anyone who has taken a life class will know what it is like to be asked to consider a model’s breasts geometrically. There’s a neat line in Alan Bennett’s A Question of Attribution where a character says he thinks Titian’s depictions of breasts look like they’ve been put on with an ice cream scoop. It’s used by Bennett as a way of showing a clash of cultural and sexual identity between two very different characters, and is an example of the ways breasts can be divisive too.

Here’s a final image of breasts in culture, from a 1970s cake decoration book by Jane Asher. I’m tempted to just laugh at it, the book certainly invites you to. Still, I can see how it’s offensive too. For me, the cake seems very 1970s, reflecting a changing attitudes to breasts. Perhaps the days of the booby cake will come again though. Other things I bumped into last weekend in Chicago included the site of the first a Playboy mansion (to background of protests at the reopening of a London club) and a El train full of young women returning from the city’s Slutwalk. Just because cultures of bits of our bodies change over time doesn’t mean the change is linear, or that everyone’s changed in the same way.

Alan Bennet: “It’s like they’d been put on with an ice cream scoop”.