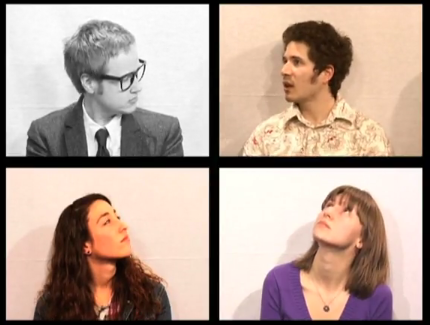 I was at a conference recently and a colleague raised an interesting question: today, where do the socially concerned scientists go? In the 1960s and 1970s, there was Pugwash or the Union of Concerned Scientists. What now?

I could think of several such scientists, though they didn’t fit the same model as the 1970s. Yes, I know Pugwash and the UCS still exist but I’d bet a good chunk of even the odd sub-sect of the world that read this blog haven’t heard of them. The nature of a socially engaged scientist seems to have changed somewhat since the 1970s. Some of my students made a great video a few years back dramatising this (screengrab above, watch in full here); with scientists from the 1950, 1970, 1990 and 2010 all arguing over the ways they feel they should address the public.

A key change has been the rise of this thing called ‘public engagement’. Now if you want to take your work outside the confines of the Ivory Tower, you can sign up to an engagement project. As I’ve written in a piece in the latest edition of Research Fortnight (paywalled, but most UK universities have a campus subscription, try this link), the rise of public engagement I something I largely welcome, but I also think it’s worth noting how institutionalised it has become, and wonder if this institutionalisation compromises the independence of academics in their ability to embed themselves in society. Public engagement as it’s framed in UK policy discourse can become a range of different activities; some more ‘impact‘-ful than others. A stall playing with balloons at a science fair is a lot easier than kicking up controversy over GMOs. It may also be more easily accountable.

In many respects, I like that the engagement institutions exist; that the government encourages researchers to do it, including support on how to do it. As I try to stress in Research Fortnight, the move away from top-down approaches to more discursive ones that stress mutual listening and learning between science and society (which many of the engagement institutions advocate) is not only one I personally approve of but, itself, a form of application of academic work from Science and Technology Studies.

One might argue, of course, that as soon as a researcher takes their work into society, they compromise their independence; that a search for objective truth requires a certain degree of intellectual dis-engagement. I think this would be simplistic, even if I do think we should question what the last 10-ish years of ‘engagement’ policy has brought us. So, I don’t agree with the Research Fortnight editorial’s take that ‘the scale and volume of engagement may be reaching the point where it threatens academic independence’. It’s not the size of engagement that’s the problem.

That video by my ex-students ends with the 2010 scientist with her head in her hands; feeling the weight of history and all the various expectations accrued upon her. I sympathise. She doesn’t have any answers and neither do I. The Research Fortnight ends with a question. As they don’t have a comments box for answers, I’ll repeat it here: how can we keep the political voice of academics independent, while supporting the idea that such a voice is part of their job, and ensuring that they in turn listen to other voices too?

5 thoughts on “Has Public Engagement become too institutionalised?”