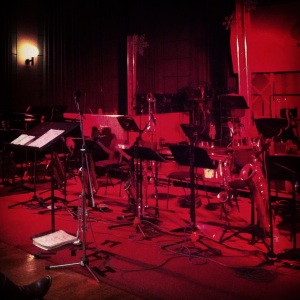 It’s world radio day! I don’t know about you, but I’m celebrating. I love the radio.

I think I just like noise. Maybe it’s because my Dad was a musician. He usually worked from home, on what are probably best described as “musicians’ hours”, so there was a steady stream of odd bits of organised noise coming from his office. He was always very focused on the quality of sounds around him, taking personal offense to musac and swearing loudly every time the doorbell rang or a car horn beeped to interrupt the more controlled flow of noise around him. As an orchestrator, it was the particular sound any instrument made which interested him most, and he’d come home from a recording session full of stories of standing out the back of Abbey Road studios with percussionists hitting bin lids. I’m not a musician, but I seem to have picked up some of his obsession sound.

I thought I’d take the opportunity of world radio day to advertise an event I’m chairing at Charles Darwin House next month on the sounds of science. Do come! There will be beer and cake and interesting people talking about the noisiness of science. It’ll be great fun.

On the run up to this, I’ve been thinking about how I could share the noises of my research. I’m a humanities scholar so mainly just sit in an office on my own. There’s the sound of an email hitting my inbox I guess, or maybe the bell ringing from the tower outside my office at Imperial or people gossiping over a cigarette by the window I sit near at UCL. There is also a really cool whistling sound that happens on a windy day in the space between the engineering departements at Imperial. Some day I really must record that. Or the glass bridge at the Science Museum. It’s held up by piano strings so makes a slight sound as you walk across it. It’s usually too loud to hear in the museum, with all the visitors, but when I worked there I’d sometimes walk across it when the museum was closed, lean out to pluck a string and just listen. There are probably other noises around my work I don’t think about. I’m going to have to take time to think and listen.

I also thought I’d share my top five listens in terms of science and technology; the podcasts I feel my week isn’t complete if I haven’t heard.

So, what are your favourite science and technology themed podcasts? I’d love to know. Also, do you work in a lab? Does your machinery, building or colleages make interesting noises? Maybe you could record it on your phone or something and share it? (Audioboo is good for this). Share your science noises!

4 thoughts on “Sounds of Science”