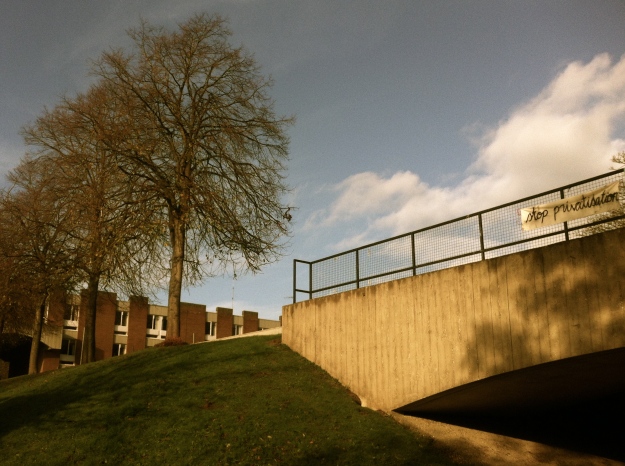 A small sign of political protest at the University of Sussex this morning.

I was supposed to go to the JD Bernal Lecture at Birkbeck College a few weeks back; given this year by David Willetts. Except it was cancelled after a perceived threat of “disruptive” political protests. So I found myself with a free evening. I had another invite that evening, to an event at my old employer, Imperial College, celebrating their ongoing relationship with EDF. Or a mate was giving a talk about Spanish communism. In the end, though, I decided the best way to pay tribute to Bernal was to curl up with a few books about him.

Here are my notes.

John Desmond Bernal was born in 1901 in County Tipperary. He went to boarding school in England, then a scholarship to Cambridge in 1919, studying maths and science, followed by doctoral work with William Henry Bragg at the Royal Institution. He moved back to Cambridge in 1927 as lecturer in structural crystallography, becoming assistant director of the Cavendish Laboratory in 1934.

Bernal was one of those scientists people feel the need to say “he never won a Nobel” about, presumably because maybe he could have. It’s sometimes argued that he just spred his expertise a bit too thin. He was largely recognised as a bit of a general clever-clogs, picking up the the nick-name “sage” at university. A couple of his PhD students – Max Perutz and Dorothy Hodgkin – did win Nobels though, as had his old supervisor, Bragg. Rosalind Franklin worked with him for a bit, as did Maurice Wilkins, Francis Crick and Aaron Klug. So he had a bit of Nobel shine around him. But it’s maybe inappropriate to lead a discussion of Bernal with a list of famous people he worked with though. He was, after all, as famous for his socialism as his science.

At school he had been rather insulated from politics. But from early 1920, he started attending Socialist Society meetings at Cambridge and, as a PhD student living in Bloomsbury later that decade, he joined both the Holborn Labour Party and the Communist Party (it wasn’t especially remarkable to be a member of both at the time). He marched in the General Strike in 1926 and was supposed to have been left very moved by the experience of walking though London streets left at a relative standstill. But his years in Bloomsbury, if anything, weren’t especially inspiring politically, and it was in the 30s back in Cambridge that he got more active. There’s a story that he was galvanized by the Russian delegation’s contribution to a major history of science conference held at the Science Museum in 1931, but I tend to think reports of damascene moments are worth taking with a pinch of salt. Some said Bernal eventually took to Marxism with a religious fever, a replacement for the Catholicism of his youth (a point others also have made about his adoption of Freud). Again, I’m sceptical when I read people are religious in their political zeal, it just seems a bit patronising. I don’t know though, maybe Bernal was. Apparently he wasn’t strictly a “card carrying” commie, having dropped his actual card sometime in 1933 and not bothering to replace it (see Fred Steward’s chapter in Swann & Aprahamian).

Bernal wasn’t unusual as a politically active left wing scientist in 1930s Britain. Eric Hobswam cites CP Snow as saying if you were to poll a couple of hundred of the brightest young physicist in the mid 1930s, you’d have found around fifteen communists, a good fifty more on left and a hundred admitting to leftie sympatheises, with the rest neutral apart from the odd handful on the right (Swann & Aprahamian, 1999: xii). Bernal could be seen as at the forefront of what some would call “red science” in three ways: the organization of scientific workers, part of political mobalisation of science against war and as one of the more influential prophets for the potential of science for progress (Swann & Aprahamian, 1999: xi).

One of the outcomes of they way Bernal was not only a scientist interested in politics but someone who felt the two should be connected was his 1939 book The Social Function of Science. The book paid strong attention to the way resources were allocated to various parts of science and technology had become crucial to the development of nations. It was highly influential, instrumental in the development of the social studies of science. As Chris Freeman summarises, for Bernal science is the most important thing humans do and so, in both short and long term, it’s own justification. It provides such a huge capacity for social change and improvement of peoples lives. It just had to be planned out in the right way. At the heart of Bernal’s book – and his political legacy – is a call to organise this great human power of science, and to organise it to serve the many, not the few. His particular inspirations and approaches contained, arguably, somewhat of an over-idealisation of USSR’s particular way of planning science by Bernal. But that doesn’t mean his central desire to try to organise science is necessarily wrong, just that we might disagree about the best way to go about it. There are a range of ways we might organise science, and a range of ways we might be explicit and hope to involve others in this process.

Freeman agrees with Bernal’s enthusiasm for ambitious well-organised use of science and technology for human welfare, but stresses need to be complemented with equally explicitly commitment to promotion of open critical debate (see also Freeman’s Vega lecture on Bernal). In reference to Bernal’s much publicsised support of Lynsenco, Freeman argues that the best way to criticise and expose reactionary ideas in science remains to point out they are unscientific in public, not to rely on political labels. Bernal’s view of organising science was basically “a vision of brains interlinked to form a complex hierarchical system” (Swann & Aprahamian, 1999: 129), and that’s where the list of “great names” at the start sort of fit. Bernal venerated expertise, or at least he had a strong belief the benevolence of the scientific expert when it came to distributing the power to make decisions about science. In many ways this is what separates him from some contemporary social studies of science. It’s also one of the (many) ways his rather scientific and technological utopian approach diverges from greener left wing politics.

In 1938 Bernal was appointed professor of physics at Birkbeck, but at the onset of the Second World War he was pressed into service. Apparently John Anderson (that’s Anderson as in Anderson shelters) wanted Bernal as a scientific adviser “even if he is as red as the flames of Hell”. Together with his friend Solly Zuckerman, Bernal gave analysis of bombing a quantitative basis, which helped make a case against exaggerated claims about the effectiveness of Allied bombing, going on – with Patrick Blackett – to advise against the bombing of several German cities as a waste of manpower and resources. Later, Bernal and Zuckerman were seconded to General Mountbatten’s D-Day planning team, and a strong friendship sprang up between Bernal and Mountbatten.

After the war, Bernal resumed his professorial duties at Birkbeck, setting up the Biomolecular Research Laboratory in 1948. Post war, although apparently he “helped put the S in UNESCO” (Swann & Aprahamian, 1999: xxiii) his politics sometimes got him into trouble with the scientific establishment. He was excluded from the British Association for the Advancement of Science after speech he gave in Moscow critiquing the nature and control of science in the capitalist west, and Julian Huxley refused to work with communist scientists. Bernal was also an active peace campaigner, involved in the World Peace Council. When the British Peace Committee attempted to host the World Peace Congress in Sheffield, a number of delegates ended up stranded in London, including one Pablo Picasso. Bernal organised a party in his flat for them, and Picasso drew a mural on the wall of Bernal’s sitting room. Bernal later gave it to the ICA, and it’s currently at the Wellcome Collection (only a few blocks from Birkbeck).

I haven’t really gone into his personal life here, but Hobsbawn, in his LRB review of Andrew Brown’s The Sage of Science described Bernal as having a “purple” approach to sex to complement his otherwise redder characteristics. Brown says Bernal and his wife took to their open marriage “with gusto” (pdf, see page 65). You can google around a bit for more. He had a few kids. His mum sounded pretty cool. Read the first few pages of Brown’s book for details on her. There are a few portraits of him in the national collection and a plaque outside his old flat in Camden. He died in 1971 and is buried in South London.

So there you go. John Desmond Bernal (1901-1971). A scientist, a leftie, a pacifist, a lover and a fighter. “Red as the flames of Hell”, but mates with Mountbatten. Not a card-carrying communist, but no less an enthusiastic one. You can make up your own mind as to what you think he’d have made of the threat of a protest over higher education funding, or of a lecture in his name being given by a Tory science minister. Birkbeck have published the text of the talk Willetts would have given, so you can make up your mind what Bernal would have thought of that too.