Book review of Megan Prelinger’s, Another Science Fiction: Advertising the space race 1957-1962 (New York: Blast Books). A shorter version of this appeared in the August edition of Public Understanding of Science. 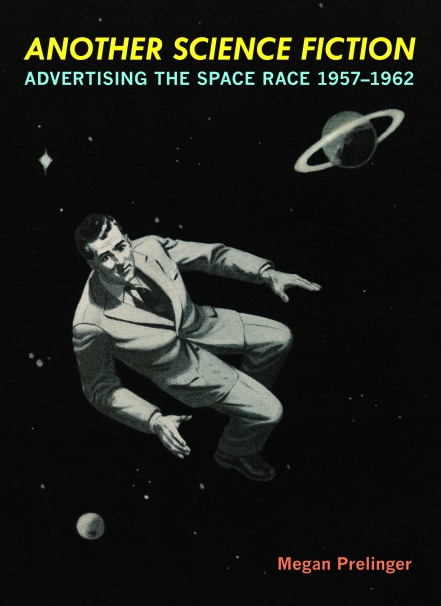 There’s a lot of loose talk about science fiction; about the great influence fiction has on science or, conversely, a great cultural crash between the two fields. This isn’t to say science and fiction do not influence each other, or that there aren’t tensions between the two; only that there can be more waffle than study on this topic.

There is a growing body empirical work on the topic which attempts a realistic examination of the topic; work which often creatively looks beyond the flashy lights at the front of the cinema to consider the various ways science fiction exists, and various ways it is influenced by and influences science (and vice versa). David Kirby’s (2011) book ‘Lab Coats in Hollywood’ (on scientific consultants for films) is one, and Megan Prelinger’s ‘Another Science Fiction’, which considers her database of 600 1950s and 1960s adverts for space race technologies is another.

Much has been made of the hype and promises of science fiction. Here amongst the trade magazines of the mid-20th century (e.g. Aviation Week) Prelinger shows us that some of the most fascinating discourses of hope weren’t in pulp fiction, but those aiming to cash in on the ‘new frontier’ of space. It’s a study of a form of science fiction which I suspect fans of the sociology of expectations (e.g. Brown et al, 2000) will enjoy. The book is, in many ways, a story of at least one thread of the social construction of science and technology.

It’s also a chocolate box of a book too; bursting with lush reproductions of these sometimes exuberantly illustrated adverts. In many respects, it is a piece of art and design history as much as it is a history of the rhetorics of science technology. It’s easy to play spot-the-influence of Klee, Mondrian or Kandinsky in places; images that provide a visual treat as much as an intellectual one (and, arguably, add something to the similarly too often loose talk about connections between science and art). The ephemeral as well as semi-technical nature of the material (amassed from the library in San Francisco Prelinger runs with her husband) also makes you feel like you have access to an area of social life at least less accessible than blockbuster movies. They are images that are at once familiar and yet also unfamiliar. It really is another science fiction, one you are unlikely to have quite seen before, even if you will feel quite at home in it. I have a small personal vice in that I occasionally like to take a break from work by spending my lunchbreak with the Science Museum library’s archive of New Scientists, having a good sniff at their particular type of paper mold, and tracking cultural changes in science by looking at the adverts. Reading this book, I got a sense of a similar joy, mediated by Prelinger along with her thoughtful and well-researched commentary.

The advertisement on page 174 of Prelinger’s book sums up her material very neatly. “Want to build a space motel?” a large banner title asks next to image of floating spacemen and tiny cap of curve of Earth in background. A subheading informs: “Thompson Products can help.” The text continues “It’s bound to happen in the not-too-distant future: an American space motel for rockets will be orbiting about the earth! While the U.S. Government may send it aloft, private enterprise will help build it. And right now, Thompson Projects is ready to design and produce important components and assemblies for such a space station of tomorrow. Fantastically difficult? Perhaps… […] If you’re considering the development of an advanced product, let Thompson help get it into production”

This is very much a story of the commercial side of the space race. A story of companies that were engaged not only in making money from the process of dreaming about the future – as with pulp fiction, a big budget sci fi movie, or indeed, much popular science – but a sense that these dreams might be made into tangible, sellable products. As Prelinger notes, many of the adverts were for recruitment. Similarly, this Tompson Products is not advertising actual products as much as a relationship with the company. The text I edited out with boxed parenthesis in that quote above is filled with blub on their company’s history of work in the field. They are running a discourse of hope on reputation. These adverts are a fiction of sorts, but the fiction of advertising, not the more philosophical and entertainment based fiction that mid 20th century space-themed science fiction is known for. They are still playing with ideas of possible futures, but as an advertising fiction, these are ideas of futures where the implication that they might be real is key. Arguably, all science fiction (all fiction) has some key connection to a sense of the real, but this is perhaps a different form of real, a montisable one. Or at least one you are invited to bet on happening.

To end on a pragmatic note, I can’t be the only science communication lecturer to note advertising as a career path for graduates. As one ex-student put it: ‘those semiotics lectures were especially useful’. I bit my tongue rather than suggest I wasn’t sure that was what their tutor had in mind when she asked the class to deconstruct references to scientific authority in advertising. We may not be comfortable with this, but it’s a reality of the communication of science. For all ‘the public understanding of science’ movement’s lofty educational aims, a lot of science communication is about making money (c.f. Fyfe and Lightman, 2007, or simply the next paid-for touring exhibition you visit at your local natural history museum). Advertising is part of what constructs science and technology; in public and within most closed expert communities too. We’d do well to recognise this.

1 thought on “Advertising the Space Race”