My set the inaugural Green Showoff last night was also a chunk of my talk at the Story today, so I thought I’d post it here. 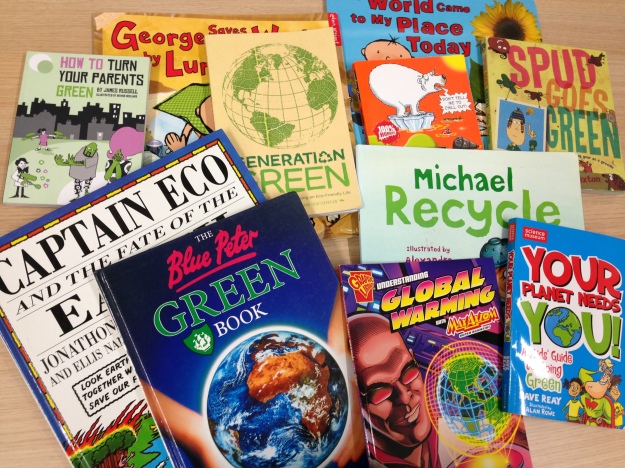 I did my PhD on kids science books. When I tell people this, they often get a sort of “aww bless” expression on their faces.

Written by one generation for the next, children’s books are full of concern over what aspects of the past to maintain and what might be different in the future. They can be deeply anxious often self-conflicted cultural products; both futuristic and nostalgic at once, full of guilt and pride about what sort of world we leaving along with fears and hope for the future. Such anxiety is especially obvious when adults try to tell stories to young people about the environment. There are all sorts of inter-generational hang-ups going on here and it’s bloody fascinating.

There was a boom in kids’ environmental media loosely surrounding the 1992 Rio summit and another running up to Copenhagen in 2009. I have a small collection of the books that were part of that, which I thought I’d share with you, and I want to focus on something interesting I found in them – the recurring character of the eco-superhero.

At first I wanted to turn my nose up at these characters. Who needs a bloody superhero to save us? I kind of find it offensive even. I don’t like a great man view of history, why the hell should we have it about our future? We need to find ways of talking about mass, cooperative action, not some magic pseudo-religious superhero savor from the sky. But – actually looing at the books – these eco-superheroes are quite diverse (well, gender aside). Some are, indeed, quite patronizing. But others take the piss. And they all sit an a social context which say something about our ideas of agency with respect to climate change.

Books aren’t the only place you see this character. Flying far above all eco-superheroes stories is TV star, Captain Planet. As the theme tune repeatedly told viewers, “he’s a hero, gonna take pollution down to zero”. Created by Ted Turner and Barbara Pyle, the show ran from 1990-1996 and is still syndicated today. Though Gaia “the spirit of the Earth” was awakened by human destruction of the planet (a nod to James Lovelock) and sends five magic rings to five chosen young people across the globe, “the Planeteers”, to fight environmental destruction and, occasionally, social injustice. When the Planeteers faced a particularly tough foe, they could pool their magic rings to create the superhero character of Captain Planet. This caped crusade may fly in to assist us, but as a booming voiceover informed audiences every episode, it is only “by your powers combined” that change really happens.

Captain Planet is anything but subtle, and very earnest in its message of world peace as well as care for nature. There was a memorable episode where Captain Planet and the Planeteers tacked peace in the West Bank, South Africa and Northern Ireland, as well as episodes on animal rights and attitudes to HIV (there are quite a few online, google). When a movie remake was announced last year, Funny or Die satirised this tone, as well as contemporary inaction, with Don Cheadle as the Captain gone rouge; cynically loosing faith in humanity he manically turned people into trees ignoring the pleas of preppy Planeteers before switching his hand from a peace sign into single middle finger and shouting “the power is MINE” as he flies off.

As earnestly played as the original Captain Planet, but published more recently, in 2007, is “Understanding Global Warming with Max Axiom”.

Part of a series of science-themed comic books, Max is a muscle-bound (and not always fully clothed) character who, after being struck by lightening, was inspired to travel the world collecting degrees in as many subjects as possible to become a Super Scientist. His lab coat allows him to travel through time and space, he has x-ray sunglasses and the ability to shrink to the size of an atom. Other books cover photosynthesis, bacteria, sound or light. Importantly perhaps, here the heroism is less about saving the planet, and more about the adventure of finding out.

It’s not just Americans who apply superheroes to green issues. Take, for example, Jonathan Porritt’s 1992 large full-colour hardback, “Captain Eco and the Fate of the Earth”. We’re told Captain Eco comes from the Earth, angry with the way humans are mistreating it (again, perhaps a nod to Lovelock) he flies around waggling his finger at everyone for being lazy or stupid.

After being introduced to “Clive” aged 9 and “Michelle” aged 12 (both more interested in books, television, sleeping, music and football than the environment) Captain Eco exclaims “Suffering Solar Systems! If these are “standard” earthings, no wonder the Earth’s in such trouble”. Whereas Captain Planet was powered by the collaborative action of young people (albeit in response to a supernatural force), Captain Eco only really features child characters to be spoken down to.

Fast forward to 2009, and the Science Museum’s “Your Planet Needs You” takes a very different approach. Here the superhero character is called upon from space by politicians but, with very British tongue in cheek, he is clearly constructed as possessing more glamour than intelligence and has to turn to a group of young people to explain the problem of global warming. They take him to their climate club where the force of knowledge is clearly introduced as the science teacher, Miss Weatherbottom. He’s a joke, as well as a sort of scientific straightman the explanations can be told to.

Equally interestingly, the Eden Project’s “George Saves the World by Lunchtime”, from 2006, features a small child dressing up as a superhero, making small changes around the home. Similarly, in “Michael Recycle” (2008, Ellie Bethel and Alexandra Colombo) we see a superhero fly in from the sky, but it is one with a colander as a helmet, clearly painted as a child playing fancy dress. Further, crucially, change here is enacted by people in the polluted town in question talking to one another (there’s a joke about threads of environmentally friendly toilet paper connecting them).

In these last three books, the superhero guise is a bit of a joke, domesticated and made juvenile, with a knowing rather postmodern incredulity for saviour narratives. Like Don Cheadle’s satire of Captain Planet, they laugh at the earnestness of the 1990s and yet, less cynically, they seem to revel in the basic narrative too.

Perhaps they are best described as having their superhero and eating it.

Looking at my collection of eco-superheroes as a whole, one omission was strikingly recurrent: a clearly articulated villain. Some locate blame with human stupidity or laziness but its usually kept vague. The closest we get to anything concrete is Captain Planet, though even here it is a cohort of baddies symbolizing a range of problems such as misapplied, uncaring science or reckless business as well as characteristics such as greed, gluttony or hate (and interestingly specifically, nuclear power). In a few episodes they even join forces in an echo of the composite powers behind Captain Planet to make an alter ego, Captain Pollution. Environmental problems have multi-causal, complex explanations, even on the Cartoon Network.

Whether this relative lack of baddie is because such stories accurately depict the abstract nature of climate change or more simply because media producers are too nervous to point fingers at people who might advertise with them, I’m not sure.It might also reflect an approach to climate communication which focuses on the positive actions people can take. One might argue fantasy super-villain characters devolve public responsibility as much as the idea of a savior from the sky, so perhaps it is for the best.

Moreover, Captains Planet and Eco, Michael Recycle and Max Axiom are merely the stories adults offer to young people. They may be offered ready-made, but they can be re-made by their audiences too, or simply ignored. There is Captain Planet fanfiction if you know where to look. I’ll leave you with that thought, and you can make your own mind up about what it means for public engagement with climate change.

5 thoughts on “Captain Eco and the World of Tomorrow”