This was first published in the April edition of Popular Science UK. Visit their Facebook page to get 3 issues free. 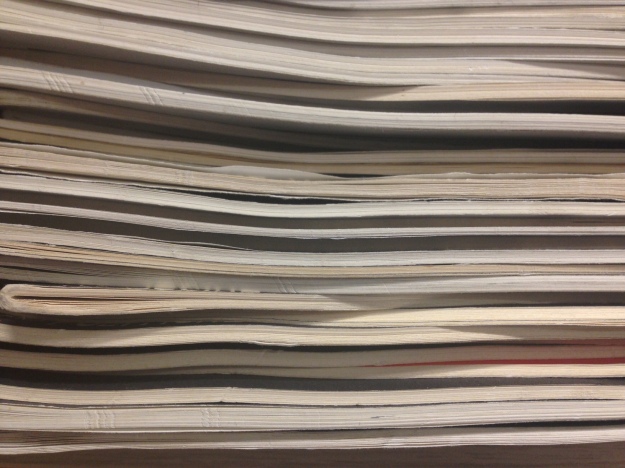 A pile of 1970s science magazines. They smell amazing.

When I was an undergraduate, one of my favourite ways to procrastinate on the run up to essay deadlines was to get lost in the New Scientist archive hidden at the back of the library. I’d pick one almost at random, open it up, give it a good sniff and dip in and out of their pages to see what I’d find.

I’d try to spot the early rumblings of what would develop into larger stories or simply details that get lost in historical retrospection. The adverts! The amazing old magazine smell! The slightly bitchy reviews of books which went on to be classics! I learnt a lot of the details of history of science in its news-stories, and a lot about the rhetorics of science communication there too. Reading the stories outside of their original publishing context helped me focus on the storytelling aspects of them, considering the ways the language and images we use to discuss new science and technology has changed over time. You could also spot interesting changes in style, and the assumptions they seemed to be making about readers’ prior knowledge or interest.

I rarely work from libraries any more, most of what I need’s online. So now, when I want some pseudo-work procrastination I go to the Popular Science online archive. This doesn’t smell quite so good, and you can’t wander through it in the same way, but you can still potter around its old pages, even if hands don’t touch paper. Type a word in to the word frequency visualiser and see the distribution of its use over 140 years. Try any word. Science. Robot. Internet. Drone. Go, have a play. As with the Google Ngrams, you have to be careful not to analyses them too quickly, without fair thought about the very diverse and individual contexts and contingencies which construct any utterance of each word. Still, as with the Ngrams, these can be a great way into the detail.

There’s certainly a rich set of data to consider. Popular Science was founded in 1872 as a monthly publication largely aiming to help spread scientific knowledge. A fair bit of their content was a matter of re-publishing scientific articles from the UK. The audience was imagined as “the educated layman”; not fulltime scientists, but knowledgeable and interested nonetheless. It was maybe easier to read unmediated science back then. In comparison, the old science editor of the Guardian, Tim Radford, tells a story about ringing up the then editor of Nature (a publication that’s supposed to be readable by all scientists, not just within disciplines) to get help understanding a particularly tricky paper and being told that even he didn’t really get it. Science today has become an intently segmented business.

By the start of World War One, tensions in Popular Science’s initial model started to show. It merged with sever other popular technology magazines and, re-launching with a new editor, took a less-academic stance. Rather than long articles and the odd picture, it focused on shorter pieces and a greater reliance on images, aiming at people with a personal interest in science and technology, especially hobbyists who might be tinkering at home. As machines became more complex and expertise flowed down ever more narrow silos throughout the 20th century, you can arguably spot a greater focus on the various promises of consumer technologies rather than science-in-progress or hobbyist tinkering. It’s always been a varied magazine though.

The focus on the promise of technology might sometimes seem overhyped, especially when you look back and find glimpses of futures that were never realised. If you enjoy these kind of lost futures, I can recommend the Smithsonian Magazine’s Paleofuture blog with it’s tagline “the history of a future that never was”. Matt Novak, its author, invites us to think about the way various imaginings of the future provided by advertising materials, popular science and fiction function to create ideas of progress, some of which we do go on to make, as well as those we don’t. He uses history to show off the dreaming and decision making we all routinely make about technology, but don’t always notice at the time.

Paleofuture recently ran a great series on the Jetsons, weaving references to non-fiction and advertising to discuss the complex range of ways we continue to imagine futures. It’s got a couple of nice pieces, for example, on traveling through a pneumatic personal tube system, and what we might now call videophones. There are also prompts to consider the political and cultural context of the Jetsons vision of the future, and what that means about the ways in which we think technology should be put to use then, and now. One post starts with George Jetson complaining “Yesterday, I worked two full hours!” before outlining some of the long history of technology applied to offer click-button access to increased leisure time (as opposed to simply giving us more work). Another piece argues the Jetsons provides a rather conservative vision of the future, one where images technological future are used to enact and refine existing social structures rather than change them. A message which is as present in the semi-fictions of advertising and so-called non-fiction as it is in the Jetsons (divides around fiction always being slippery, but especially so when it comes to the future of technology).

If you want more, Googlebooks offers access to a host of other science and technology publications, some older even than Popular Science. There are several university archives too. I think my favourite is Virginia Commonwealth University’s collection of Preventive Maintenance Monthly. A US Army magazine founded during the Korean war after realising the ways soldiers were encountering problems with their increasingly complex equipment, it might not seem so exciting as the PopSci visualiser or smart analysis of the Jetsons. Except that “father of the graphic novel” Will Eisner was its artistic director from the magazine’s 1951 launch until 1971, and employed several other artists who went on to be stalwarts of comic book publishing. It’s visual approach to explaining how technology works, as well as the way they rhetorically use humour to warn about mistakes, is fascinating.

Finally, all this play in archives has made me worry, again, about the future of popular science publications like these. Perhaps the web’s ability to connect and provide for smaller audiences provides some hope: Crowd-funded startups like Matter, for example. Or maybe the expectation of free-to-read content will mean it’ll be down to philanthropists to support media, as with Aeon, or models which somehow manage to rely on advertising revenues (and to do so without compromising editorial independence?).

Or maybe we will just stop producing new content and sit getting lost in archives, endlessly reliving promises of futures long gone. Much as I think time spent with old images of the future can help us think more clearly about the future we want to build now, we also have to pay attention to how people are currently building our futures, today.

1 thought on “Playing in the archives of popular science”