I’m a Londoner to the core. But I’ve just finished a year in Brighton and can report that this not-London is ok, you know, if you like that sort of thing. Much as I’m looking forward to going home, I will miss Brighton a lot. Here are 20 things I loved about the place. 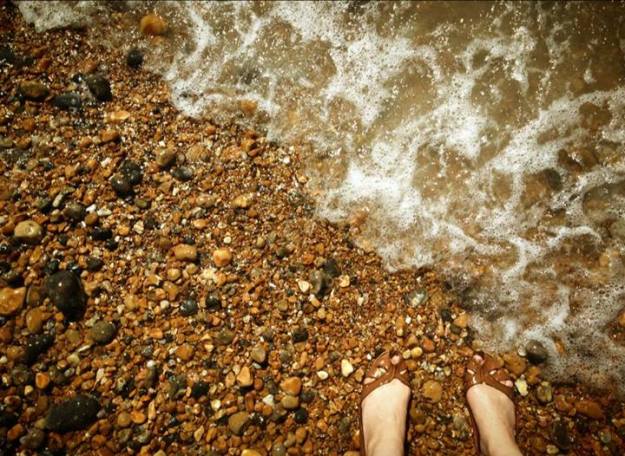 1) The sea. I could waffle on about its smells, sounds or just the sight of the thing. But it’s the sea. The sea. You know it’s awesome. Yeah, it’s a pebble beach, but that’s a good thing because you don’t get sand in your pants. The seagulls can STFU though.

2) The burning of the clocks. This is hard to describe, but possibly the best thing I saw all year. It’s a secular statement in deliberate contrast to the consumerism of Christmas and an articulation of the tensions of life in modernity. But really it’s just a joyous winter carnival. People – mainly children – gather together to make paper and willow lanterns – often of clocks or other modernist instruments – which they carry through the city centre – many dancing as they go – to burn them on the beach. Full set of pics. 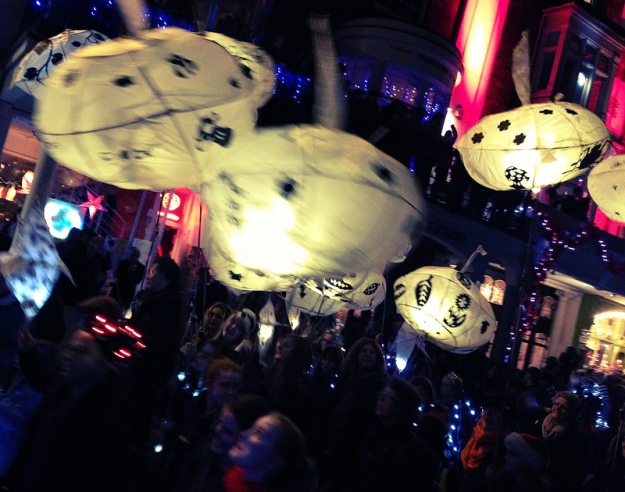 3) The parks (Preston, Hove, Queen’s). They get overshadowed by the beach, but that also means they can be gloriously calm and tourist free. Patches of wildflowers smelling strongly of honey, local kids playing, quiet patches of shade under trees, all the usual trimmings.

4) Vegetarian and vegan food. Yeah, yeah Glasgow is vegan paradise, whatevs, Brighton remains reliable. It’s nice living in a city where you can routinely pick between three different types of milk to have with your coffee, because giving up animal products can be about finding new ways to open choice, not restriction. It’s not about the big name posh places which feel the need to be overtly veggie at you either, it’s just about there being good vegan food available. Mad Hatter Cafe, Planet India, Wai Kika Moo Kau and Boho Gelato for example.

5) The Booth Museum. Stuffed owls and a narwhal horn. A gem of a small natural history museum.

6) The pro-Palestine/ anti-Greenwash protest outside the Sodastream shop towards Hove (and the counter-protest it’s inspired). Every Saturday morning without fail. Multitudes of flags, people in drag, police, lots of leaflets and a fair few claims to know “The Truth”. Every now and again I want to write something arguing it sums of reflexive modernity or something, but it feels like a reduction of a complex issue many people clearly feel very passionate about. Go, visit the protest one weekend and have a chat to the campaigners. They’re nice people.

7) The start of the Brighton Festival, when local schools take over the streets dressed as their favourite books. Despite pouring rain, it was brilliant. The rest of the festival was lovely too – pulled out a spirit of carnival which is always at the heart of the city.

8) The Pavilion. Inside and out (worth paying to visit the interior). Ridiculous, but part of the place now and worth gawping at, if only to think “FFS”.

9) The look on tourist kids’ faces when then first spot the sea as they walk down from the station. Sometimes they bounce up and down in excitement. Sometimes adults do that too.

10) Winter. Brighton might be known for the summer, but both the beach and the lanes are just lovely in fog and snow. 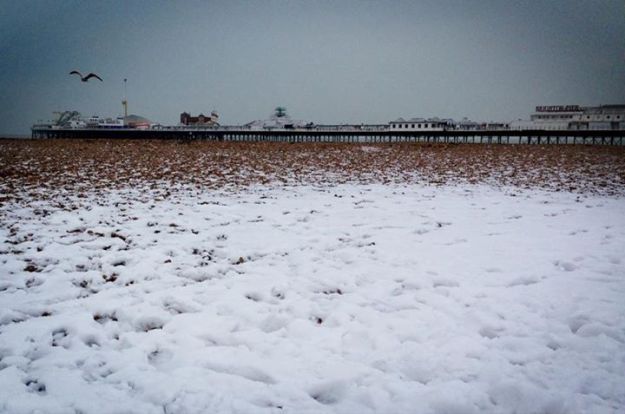 11) Bookshops. There are a host of shops selling second hand clothes, books, furniture and more across the city, from charity shops and flea markets to more rarefied antiques. I have particular affection for the Amnesty bookshop near the North Laine, and Oxfam bookshops near there and in Hove.

12) The drains. Obviously I’m very thankful for the city’s water management system which means I don’t have to regularly wade through my neighbours shit, but beyond that I can recommend a tour of the Brighton drains, which are fascinating (and smelly, but not overpoweringly so).

13) The ruin of West Pier. I know there is something slightly off about finding ruins so beautiful, but it is gorgeous. At a slightly quieter end of the beach, it’s a spot which makes a lovely comparison to the bustle around the main pier.

14) Argus headlines. It’s not every week they make you laugh, but that’s part of what makes them special.

15) The streetart. This varies a lot from official stuff like one advertising the local police helplines to less-than-favorable commentary on local MP Mike Weatherley’s housing policy. I like the colour and slightly anarchic feel it provides the space; a bit like the city is “inked”, not unlike several of its residents. I’ve really enjoyed the recent spate of badgers, pangolins and pandas as well as the short series of satirically pro-Tory revolutionary posters. 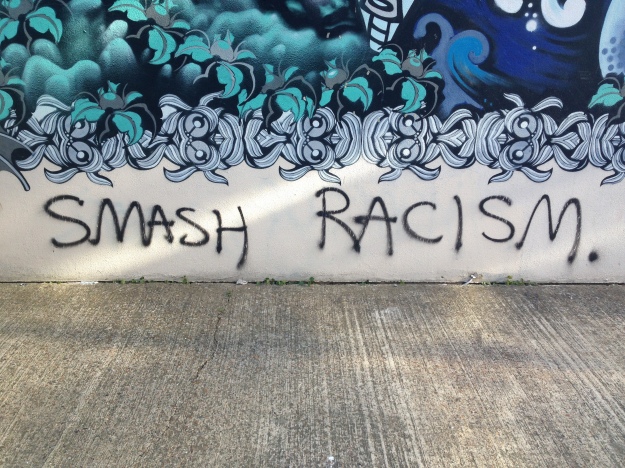 16) The Devil’s Dyke. Take an open-topped bus up, potter around enjoying the views, then walk back to the beach via Hove Park and that patch of green that runs parallel to Woodland Ave just off the top of Dyke Road. There’s loads of other lovely countryside around Brighton too, as well as other beaches. It’s worth walking up to/ around Lewes and the cliftops near Seaford. There’s also great coastal bus route that runs to Eastbourne.

17)  Hippies et al. Brighton has a reputation for green and radical left politics but it’s worth remembering it’s Home Counties commuter-ville, much of it is pretty conservative/ centrist. It may have the country’s only Green Party MP, but her constituency’ flanked by a couple of Tories either side. It has it moments though; treehugger, anarchist and more. See also streetart, the sodastream protest and vegan food. 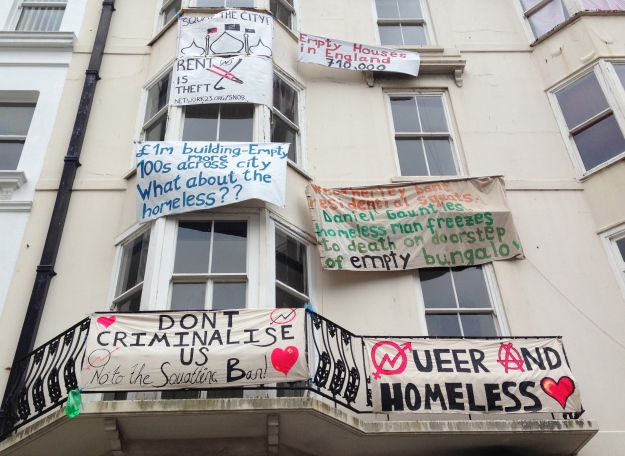 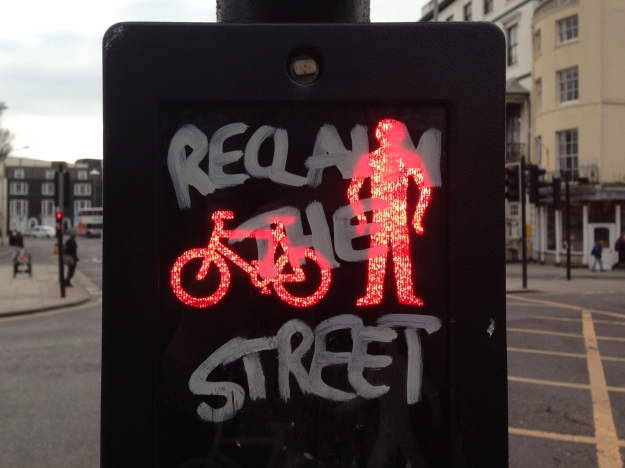 18) The “I am human” wall in Kemp Town. It’s not just that it’s there – otherwise I’d include it in streetart – but more that it reflects an attitude in the city at large. It’s totally normal to see same-sex couples holding hands in the streets. It is the sort of normal I want to live in. Should be true everywhere.

19) Pubs and coffee shops. When I want to meet people in London and think of “a nice” pub or coffee shop, I tend to draw a blank. In Brighton the problem is picking one. There are loads of ok places in London, tonnes of interesting ones too, but everywhere seems to be busy, expensive and/ or trying to show off how awesome it is. Brighton, in contrast, is reasonably quiet and unpretentious, reflecting the more chilled approach to life I guess, and simply that there are fewer people.

20) The beach at sunset. Sit with a beer and count the colours. I won’t try to capture it in a photo, it’s something to be experienced.