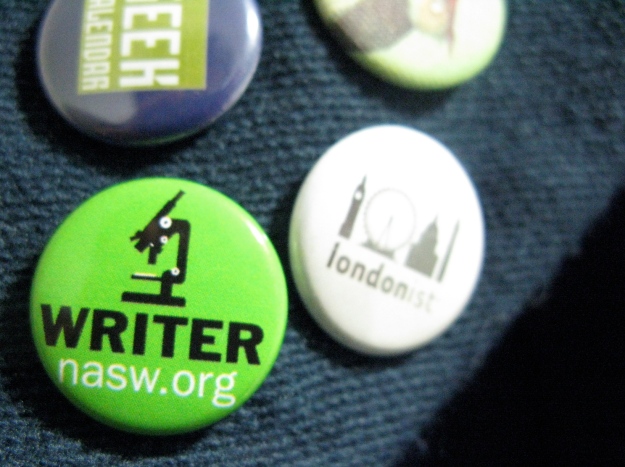 This week, the Guardian’s science blog published Tim Radford’s Manifesto for the Simple Scribe. It’s a lovely set of tips for better writing which has been passed around the UK science writing community since it was first written in the mid-1990s.

I was really sceptical it’d appeal to a broader audience. I was wrong. As soon as it was posted, it spread quickly on twitter and facebook; spread with warmth and across the globe. I’ve seen tweets about it in several different languages. It’s currently the most-read piece on the Guardian science pages, even beating the story about the astronaut falling off his bicycle.

Ian Sample asked a great question when he shared a link to the manifesto: this was written last century, what would you change? This is my attempt at starting an answer. I’d be interested to know what others think.

Martin Robbins suggested twitter ‘nukes’ point one (that you’ll never meet your reader). I think Robbins is right to draw our attention to a change in read/ writer relationships, but I’m not sure nuke is quite the word. It’s only a small percentage of readers a writer is likely to interact with.  The loud ones, the bored, the ones with an axe to grind or, more positively, those that feel some relationship with the author or community of other commentators. Yes, it’s easier to do this and twitter lets you talk to them. You can also watch people sharing your work, using sites like topsy.com. This is more than was available a few years ago, but it’s no where near comprehensive. It’s also a development of structures for relationships with readers that were already in place: It’s worth remembering that Radford was letters editor before he moved to the science desk.

The manifesto was published on the run-up to a Q&A with Radford we held at Imperial on wednesday. A member of the audience there asked him how he felt about readers comments when his writing ends up on the web. Radford said he’d found himself ‘depressed, but also profoundly impressed’ by these.  On the one side there were those commentators  who react to some key word like ‘climate’ and ignore what you’ve written, ranting off about something else entirely. But then he had also witnessed experts on a topic find each other through comments and develop ideas mentioned in a piece, making something new from their interaction. I thought it was fascinating that both of these examples were a matter of readers interacting really without the need for the writer.

Maybe that’s a function of an old-media writer, one that is slightly unaccustomed to building a relationship with readers through comment threads. I suspect a similar list written today would include some tips on how to work productively with the people formerly known as the audience.  But I also think it’s partly a matter of working for a mass-media brand, and there are practical difference between the crowded space of the Guardian and a cozy personal blog. I’m not entirely sure it’s appropriate, or possible, to expect one to try to be the other. I know I teach differently in a large lecture theatre, compared to a small seminar room (or a meeting in my office with one or two students). I’m not sure we can expect writers to meet their readers, especially when writing online, as texts may become all the more open. Or at least we can’t expect them to meet all of them. To allow the illusionary interactive feel of twitter con us into thinking we have would be silly.

The manifesto doesn’t really talk about linking, a point made critically in the blog’s comments. If anything Radford makes a point of stressing linearity for clear writing (though he does mention putting ‘twiddly bits’ in, see point 10). I think linking is part of the art of being a writer in the 21st century. I think it is something writers have to think carefully about, take time over, will get better at over time, and will develop their own distinctive style for. I suspect it is a skill which the wise old writers of the future will be keen to share tips about, and in that respect this manifesto shows itself up as a bit 20th century.

For me, the biggest difference between today and the 1990s is the way the online communication means it easier to get away with writing for rather niche audiences (a small percentage of the WHOLE INTERNET still being a fair quantity). Much of this manifesto reads like tips for sharing science to as broad an audience as possible. It’s classic mass-media communication. Today, a writer for the Guardian might want to speak to as many people as possible, but the many bloggers who will have lapped up Radford’s advice won’t necessarily feel the same way.

I suppose niche writing has always existed though, just as I think there is an ongoing market for writing which aims to share a piece of science with as many people in the world as possible. Indeed, one might argue that because niche communication now increasingly happens in relatively public spaces of the web, there is a need to make it digestible to diverse audiences. Similarly, we might argue that as science becomes increasingly specialised, all science should be easier to understand outside the small community of peers which produced it (and that goes for the composition of journal articles as much as anything else).

Another question we might ask is whether this desire to talk share science with a mass audience ever really held true, even back in the 1990s? When I posted a link to it on twitter, I did so with the quote: ‘No one will ever complain because you have made something too easy to understand’. Mariette DiChristina, the editor in chief of Scientific American, re-posted this with the comment ‘Except some SciAm readers, who will!’. She has a point. I’ve heard complaints along these lines too. Indeed, we could see some in the comments to Radford’s piece, many incorrectly conflating ‘easy to understand’ with patronising the audience. I suppose it’s a slightly utopian statement in some respects, a challenge (see also point 4, on journalism never being self-important).

And that, in the end, is my answer to Sample’s question. Yes, these tips are a decade and a half old, but it’s a manifesto. As such, it’s a statement of desire born out of an awareness of what is understood as some key problems. It is a statement of hope, not matters of fact. Our tools for science writing may have changed slightly, and I do think this has an impact on what we expect of it, as well as the relationships between scientists, writers and readers. But I don’t think our ideals for science writing have really changed that much.