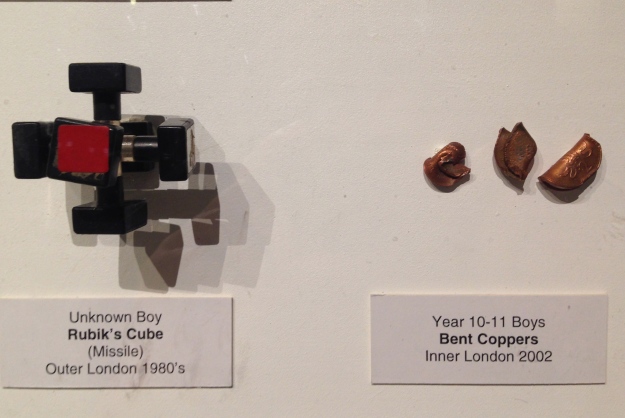 A Rubik’s cube remade as a weapon. This post first appeared on New Left Project.

Confiscation Cabinets – a new exhibition at the Bethnal Green Museum of Childhood by artist Guy Tarrant – shows a series of artefacts confiscated by the artist from schoolkids, while he was working as a teacher.

The objects include homemade games, toys, adornments, weapons and keepsakes from 150 different London primary and secondary schools amassed over the last three decades. A preview I’d seen of it suggested the exhibition was largely about old toys, a trip down memory lane sort of exhibit. But it’s far from that. You can see products like that in the main galleries anyway. What makes this exhibition different is that they are artefacts of confiscation; objects which show the bits of contemporary urban childhood which are much less marketable.

So, after the plastic spiders, friendship bracelets, yo-yos, hairbands, tennis ball and a headless Mr T doll were largely paper-based hand-made items which were in some ways deeply ephemeral but really brought out the sheer boredom of a lot of school. Paper planes, rubber-band balls, notes kids have passed each other (one heartbreakingly, “Sarah, do you like me? Yes or No” with the “No” box very clearly ticked), a magnificently chewed biro and an entire hand-drawn pack of cards.

And then we get to the weapons. Because childhood can be really, really shit and kids arm themselves, sometimes very resourcefully. There was a glue spreader impressively sharpened to a point, an axe made from a stick and a bit of flint, the old breath freshener and lighter turned flame thrower trick, some olbas oil that had been used in an eye attack (and caused a child to be hospitalised), some computer mouse balls stripped down to act as missiles and a toilet handle fashioned into a knuckle duster. Also ingeniously weaponised were also pieces of a shopping trolly, one of those hanging handgrips there used to be on tubes (with the ball at the end), a taped up table leg, a door knob and a fire extinguisher pull. And some bullets. The most inventive was probably the deconstructed Rubik’s cube which had been turned into a missile.

Overall the exhibition was quite unsettling. But in a realistic way. It’s not an image of London childhood I always like to remember, but it was one I still recognised.